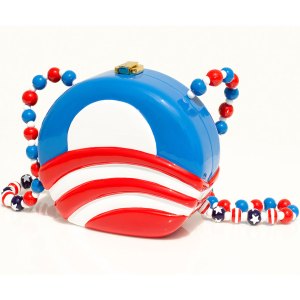 As mentioned in the Featured Case post, when I was exploring the Timmy Woods website to look for the allegedly infringing snowman purse, I noticed that Ms. Woods has also designed “The Obama Bag,” which can be yours for the low price of $375.

I’ve always been a fan of the “O” logo, and I was amazed at the “adaptability” of the logo throughout the Obama campaign.  Whether it was adding a rainbow flag (gay/lesbian) or notebook paper (students), it seems that every “special interest” group (self-defined or otherwise) was able to adapt the logo to fit that group’s interest.

As a trademark attorney, I naturally had to ask, is this ok?  From the Timmy Woods purse to the thousands of online vendors selling t-shirts, magnets, mouse pads, etc. – none of it seemed connected to the official campaign.  Perhaps this is a new phenomenon.  I see the reverse situation happen all the time:  Local or national political candidate “borrows” a popular ad campaign for his or her own use.  In the case of Ralph Nader using MasterCard’s “Priceless” campaign, a court found that Nader’s use constituted “fair use” and did not infringe MasterCard’s intellectual property.  (For more on that case, including the court’s decision, CLICK.)

But the Obama logo is different, this logo was designed by professional artists, and it is the people who claimed it as their own rather than a politician swiping something already embraced by the public.  (For a fascinating video interview with Sol Sender, design lead for the team developing the logo, check out this site.  The interview shows the design progression for the logo and how/why it’s different than the usual campaign slogan.)

With the rampant use of the logo, I had always wondered who, if anyone, owned it.  Once I saw the Timmy Woods purse, I had to investigate.  Lo and behold, “Obama for America” has a federal trademark registration for the logo!  The application was filed on 5/17/2007 and was registered on 12/2/2008.  The registration covers a myriad of products: bumper stickers, DVD’s, jewelry, mugs, water bottles, clothing, and other goods/services.

Along with ownership and registration of a trademark comes a responsibility that the owner protect the mark from unauthorized uses.  One consequence of failing to do so is called “naked licensing.”  Naked licensing occurs when the mark owner gives an express or implied license to another person so that that person can also use the mark, but the mark owner then fails to control the quality of the goods on which the marks was placed.  See Doeblers’ Pa. Hybrids, Inc. v. Doebler, 442 F.3d 812, 823 (3d Cir. 2006).  The result of naked licensing is that the mark owner will be deemed to have “abandoned” the trademark, thus losing rights in the mark.  Essentially, the mark loses its ability to identify a single source as controlling the goods.

Barack Obama’s official campaign website, http://www.barackobama.com, contains a “Downloads” page that allows anyone to download the “O” logo.  At the bottom of the page, the following text appears:

By downloading the Obama for America (“OFA”) logo from this site, you agree that you will use the logo only for your personal, non-commercial use. You cannot market, promote, sell, or exchange anything that bears this logo. To avoid having to register with the FEC, you should limit your printed flyers, posters, or other materials for any event to 500 or fewer.

This looks like a license to me.  The owner of the trademark, Obama for America, is granting the use of the logo in exchange for the user’s agreement to not “market, promote, sell, or exchange anything that bears [the] logo.”  (Wow, you can’t “exchange” anything bearing the logo?)  Since a finding of naked licensing results in abandoning the mark, the burden of proof is high, but it seems like there is rampant naked licensing of the O logo – at least with respect to people who may have created products from logos downloaded from the official webpage.  For those people that sourced the logo elsewhere and then created goods with the logo, my guess is that they might just be “regular” trademark infringers.  For those people, perhaps the uncontrolled use by the licensees could result in an abandonment of the trademark registration such that everyone – regardless of where they obtained the logo – might have a decent defense.  At that point, would the mark still be strong enough for the owner to assert common law rights?

Obviously, this is all academic because what are the chances that Obama for America will start litigating?  I do think it’s an interesting issue, and I would love to see some comments from readers.  Should Obama for America have even sought federal registration?  If Obama detractors use the logo in a negative way, would it be hypocritical to sue the detractor and not someone like Ms. Woods who used the logo as an apparent “fan” of the campaign?  Should all political slogans and logos be public domain for all – free for commenting, criticizing, and profiting?

One thought on “The Obama Bag”