That answer was No.  Citing many of the TTAB cases that have served as the foundation of cannabis-related trademark prosecution (i.e. In re Morgan Brown, JJ206), the court concluded that since the cannabis-related goods were illegal at the federal level, the parties were was not entitled to injunctive relief; and, the defendant’s counterclaims were dismissed under the same reasoning: 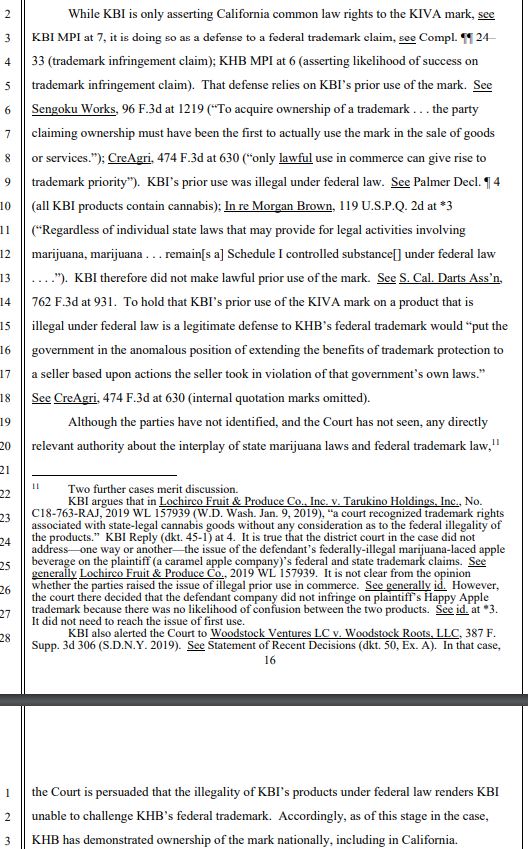 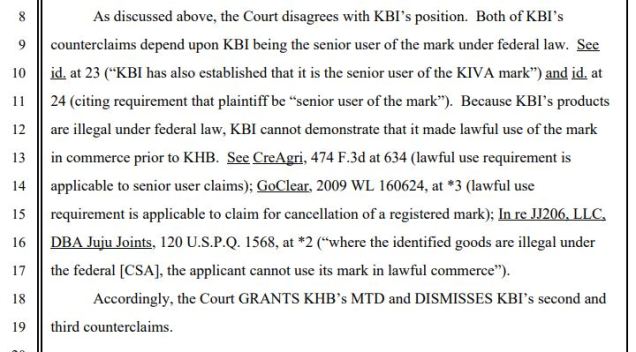 Several other issues to note in this case (ie. the nunc pro tunc assignment issue).

In my cannabis-trademarks presentations, I have some slides showing companies who have used mutations of “famous” brands such as Reese’s and Hershey’s to sell cannabis-related products.  The cannabis manufacturers generally think this is “parody” and allowed, but it’s usually not, and the non-cannabis brand owner typically wins based on trademark infringement and/or dilution.

There are also companies trying to recapture the legendary and murky past of cannabis strains.  For example, there have been federal trademark applications for PANAMA RED and other well-known cannabis strains.

Today, I read about another trademark/branding issue.  I won’t repeat the entire story since it was well-told HERE, by Gary Stein.

In a nutshell, a pre-legalization-boom pioneer grower in Florida became associated as the source of a particular strain, MYAKKA GOLD.  Fast forward a couple of decades that included prison time, the destruction of all MYAKKA GOLD genetics, and a pardon, and we now have legal cannabis in Florida.  According to Mr. Stein’s article, one of Florida’s licensees, Surterra, has named its product MYAKKA GOLD.  In fact, the entire brand is built around “the legend” of “Florida’s Finest”, namely, MYAKKA GOLD.

Legally, the company may be in the clear.  If nobody else is using that name as a mark, or if it was being used and has been abandoned, then it’s quite possibly free for the taking.  But here’s where trademark law concepts become important.  The purpose of trademark law is to protect consumers from confusion as to the source of the goods.  When you buy a Pepsi, you expect it to taste like the same Pepsi you’ve always known and loved.  This is also why companies who license their trademarks to other manufacturers must exercise quality control – the Kit Kat you buy from Factory A should taste like the Kit Kat from Factory B.

In this case, we see how important branding can be with regard to cannabis.  This is a snippet from the article quoting Donnie Clark, the alleged founder of MYAKKA GOLD:

“They never talked to me. They never even called me.,” Donnie said. The Feds destroyed every bit of what he had, down to the seeds. “Besides, I saw that description on the internet. First thing that hit me was that they say it’s an indica(hybrid). It was not damn indica! It was straight sativa!” And as far as the terpene profile, that mixture of organic chemicals that give the plant its unique taste, smell and effect? According to Surterra, their Myakka Gold has a, “unique terpene profile of low Myrcene, and high limonene gives it characteristics of Sativa. It also has a high percentage of Caryophylene thanks to its Indica parents. This Florida Original has a complex pine and berry aroma”. According to Donnie, “Nah”.

Note that Donnie said that MYAKKA GOLD was a sativa whereas the new user of the name is saying that it’s an indica hybrid.  Also, the terpene profile was different.  This can be extremely important for patient safety, expectations and consumer confusion purposes.  If the public has come to identify MYKKA GOLD as having characteristics ABC, and this MYKKA GOLD “2.0” has characteristics XYZ, then trademark law fails.  Of course, in this instance, (federal) trademark law is of no help because cannabis remains illegal at the federal level.  Under Florida state trademark law, the new user might be able to get a registration, but we’re still left with a possible misappropriation of “the legend.”

BONUS CONTENT:  There was a federal trademark application approved in 2014 for MYAKKA GOLD for use with rum, but the applicant never followed up with providing specimens of use.

BONUS EXAM QUESTION:  There is a Myakka River in Florida.  Does that change the trademark analysis?